Before the race starts, ascertain the course’s handing, and put the spinnaker in that side – port for a porthand course and visa-versa. Keep the halyard tidy, by passing it under the barber hauler and secure it in the spinnaker sheet cleat 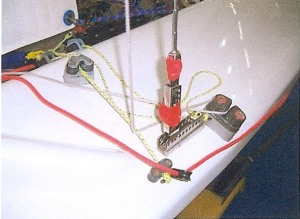 –  The white in this photo is the halyard.

As you approach the top mark, release the barber hauler (check on the previous tack that the halyard is in the top of the jaws) once around the mark, set the pole (guy uncleated), but leave the sheet cleated on the side tank – while the helm hoists. Once pole is on the mast, the guy can be pulled back to the mark and cleated. Sit on the side deck, taking the sheet in hand. Your front hand controls the pole height, and the back one the sheet.

Reach to reach – Helm calls the gybe,  pass the sheets to the helm, then crew pulls the guy back with one hand (and hence the pole until it is at 90 degrees or the old clew on the jib luff), and releases the windward barber hauler with the other. Pull the boom over, and pull on the new windward barber hauler, and reach around the mast to release the pole from the hook. Pull pole to windward, and release the other end clip. Attach the new guy, push the pole out (check uphaul/downhaul engaged) and clip pole onto the mast. Cleat the new guy into the cleat, side down and take the sheet in hand.

Run to run – pull the gut back until the spinnaker is equal down the centreline only. Less rush to pull on new barber hauler – do pole first. Helm can fly the spinnaker, on a good day, right through the gybe.

If in doubt, stow the pole – on the leeward side if feeling clever! – drop into the windward spinnaker bag, gybe with two sails only. One settled on the new gybe,  re-hoist from the new leeward bag.

On a standard course, after the two reaches, drop into the windward bag (which is the bag you hoisted from initially). If tactically reasonable, try and do the run with two matching gybes to the reaching legs, allowing the drop to be into the original bag – setting the boat up for the final hoist on the last triangle.

If however this is not possible – windward hoist/chuck.

Release the guy (windward side) from its cleat. Gather the spinnaker in a ball in both hands, and stand up. Helm takes up the slack in the spi halyard (V Important!). Crew shouts ready, helm confirms, crew the throws the ball of the spinnaker FORWARD, aiming to get it clear of the jib luff, and around to leeward – as the helm hoists in double quick time. Crew then sets the pole.